Set-Point is a novel about personal, sexual, and physical identity. A voice that is at once brutally honest and humorous follows Luck Frank, a mid-20s aspiring screenwriter living in Montreal who begins work as a digital sex worker, selling data recorded on interactive erotic consoles. She keeps her work separate from her artistic and personal life until a user threatens to release her identity. Lucy struggles with body image, her mother’s illness, and her feelings about her new line of work while trying to sell a series of scripts parodying Karl Ove Knausgaard’s My Struggle series. Segments of the novel take place inside of U:3D, a massive multiplayer online world-building game in which Lucy’s project is produced. Unfolding in Montreal youth culture, this debut explores intellectual parody, mental and physical illness, and the relationship between technology and sex. 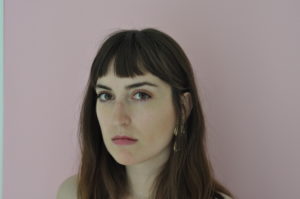 Fawn Parker is a novelist, publisher, and literary agent for new and emerging authors. She is the author of Set-Point (2019) and Dumb-Show (2021), both published by ARP Books. In reviewing Set-Point, novelist Joan Thomas said “Parker’s sensibility is contemporary, smart and funny; fans of auto-fiction by international writers like Ben Lerner or Elif Batuman will love her. In fact, the central character, Lucy Frank, is writing a parody Seinfeld script featuring Karl Ove Knausgaard.” Fawn’s short story, "FEED MACHINE," was long-listed for the 2020 McClelland & Stewart Journey Prize. She was the recipient of the Adam Penn Gilders Award for Fiction (2019) and Concordia University's Irving Layton Award for Fiction (2017). Her writing has also appeared in EVENT Magazine, Joyland, The Puritan, carte blanche, Vallum, and other publications. As the founder of the Parker Agency, she represents new and emerging Canadian authors. Fawn has a Master’s Degree in English, Creative Writing, from the University of Toronto. Her third novel WHAT WE BOTH KNOW is forthcoming with McClelland & Stewart in Spring 2022.

Get all the latest news from ARP by subscribing to our mailing list today! As a special thank you, we’ll send you a sampler with special excerpts from the newest ARP books – hot off the press and into your inbox.